This is a Must Have add-on for any animator, it’s an add-on for quickly parenting objects to characters, or at least it seems like that’s what’s meant to be for, and in any case, it’s the most common use case for it.

It’s installation and usage is very simple, I’ll show you an use case, and show you how it works.

Some add-ons have been carelessly put in new tabs in the tool panels, I’d recommend you modify it yourself and put it in either the Animation Panel or the Relationships Panel, a tutorial on that later. In any case, just after installing it you’ll find it in the T (tools) panel in a tab called Dynamic Parent.

Create: select the parent and the child object (in that order) and hit create, it will create a child of constraint and keyframe it so it starts being parented at that frame in time where you’re standing.

Disable: will create the corresponding keyframes to disable the child of constraint.

Clear: will delete all keyframes and constraints from your animation so you can start over.

Bake and Clear: will convert all the animation of the child object parented and unparented to keyframes and delete the child of constraint leaving a sort of cleaner scene, although this isn’t editable so if you want to tweak it afterwards you’ll have to do the parenting again.

So here is my character, and he’ll pick up the suzanne figure from where it’s sitting.

Usually you’ll just the previous animation, anticipation, etc, until you get to the point of the character touching the object 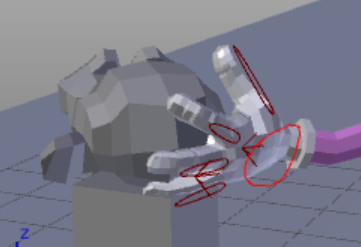 Then go to the T panel and select Create.

Great!, now if you select suzanne and go to the constraints you’ll find this one,

you’ll notice that the influence has been keyed, and in the dopesheet you’ll see a new keyframe in the frame you’re standing at, and the frame just before that, so the object is only parented from this frame and on.

Here is the link to the last version I’ve got, and it’s hosted on my dropbox!

Questions? doubts?, that’s what the comments are for!