I was thinking about this first lighting club article for a moment now. I was looking for the perfect idea, the ideal short or advertising to talk about. And this morning, I found it. This short deserve the first Lighting Club article for sure.

“The Stained Club” in the Lighting Club !

‘‘ Finn has stains on his body. One day, he meets a group of cool kids with different stains on their bodies. One day, he understands that these stains aren’t just pretty. ’’

This french short called The Stained Club has been done by Rubika School’s students. You maybe don’t know this school name but Rubika was previously called Supinfocom. They were six in the team : Melanie Lopez (directing, pre-prod, compositing), Simon Boucly (rigging, animation), Marie Ciesielski (character artist, texturing), Alice Jaunet (Modeling, Sculpting, texturing), Chan-Stephie Peang (Modeling, animation) and Beatrice Viguier (fx, compositing). And just for you I had the chance to ask a few questions to Melanie and Beatrice. 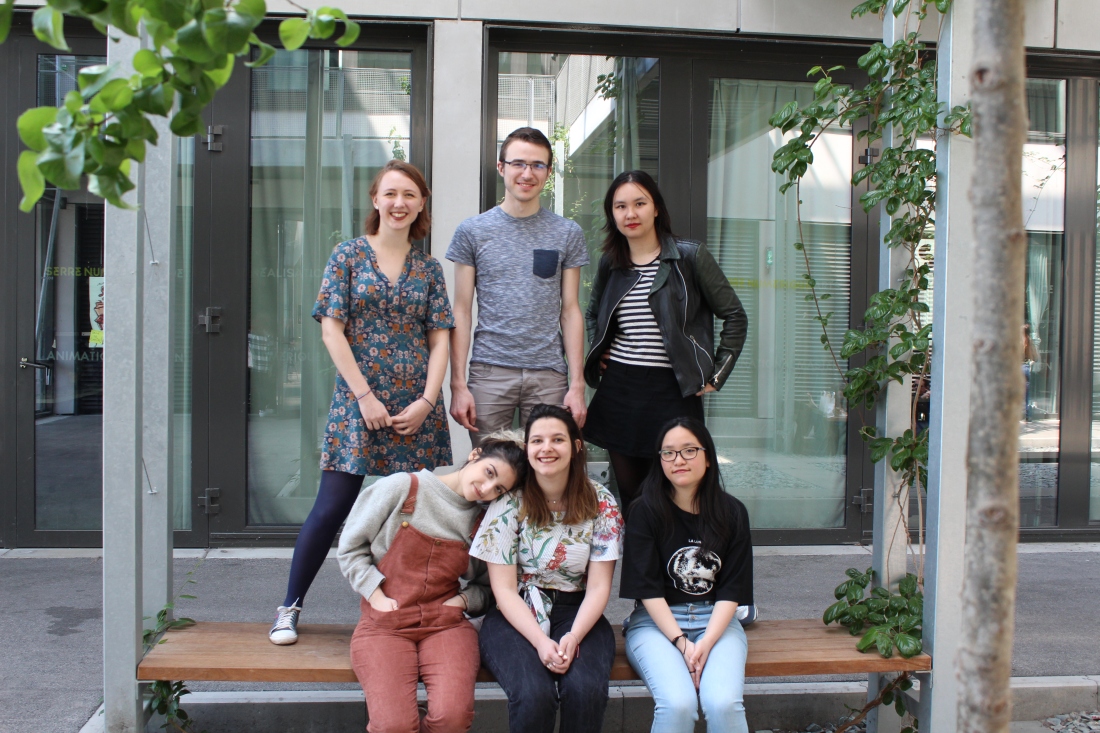 “ Hey you ! Congrats for The Stained Club ! Could you please talk about the global idea of the film, where does it come from and how did the short take this artistic direction ?”

Melanie: “Hello ! Thanks for letting us be a part of your first ever article. I initially presented a scenario idea that was selected by our professors. Once it was selected, We refined my scenario together before they assembled a team to work on it.  The story was inspired by Angela Strassheim’s project ‘Evidence’, for which she had photographed the inside of seemingly perfect American houses where tragic murders had happened. She used a special UV light to highlight the blood stains that remained despite intensive years of cleaning. It made me think : what if the emotional pain we felt left us with the same kind of traces, and we could not remove them? Thus I wrote Finn’s story.”

“ What was the main challenge for each of you in term of lighting / compositing ? ”

Beatrice : “We didn’t have a precise idea of the final look. Therefore, the look development step lasted a while. When we finally could work on the final images, we were able to go further than with the draft images we had before and take time to define properly our final artistic choices. This was a part we didn’t want to rush and be unhappy with for the rest of the production. My goal as TD was to understand the intentions from Melanie, artistic director, in order to get what she precisely wanted. She did retakes in Photoshop of my first compositing tries and send them back to me. This back and forth allowed us to go quicker and quicker on each shot. Our first challenge was the realistic lighting. We followed the colorboard as reference along with stills from live action movies. We used the Arnold renderer engine with HDR environments and a few extra lights to enhance the artistic intention of each shot. The lighting remained globally simple. For compositing, the main technical issue was to add a shoulder camera movement on each shot. We wanted to be clever in order to not render every frame. I scripted a tool that could create a camera in Maya from a text file generated in After Effects. The text is the result of a tracking from a live action shot. This camera was then adjusted by our animators in Maya and then I could finally import it in Nuke using projection.”

“ There is a few different moods and lightings, how did you work on those ambiances ? Do you worked with color-scripts or references ? ”

Melanie : For each sequence, we discussed the main intention before what should be happening in it and most of all what the spectator should feel without having to tell him. We gathered photography and movie references and worked on a colorboard for each sequence. When we started lighting and compositing, we worked with the colorboard and one main movie screenshot as a reference for the whole sequence. Our main references were Xavier Dolan’s movies (Mommy mostly) and Terrence Malick’s Tree of Life. We first worked on creating a keyshot for each sequence and for whenever there was a change of lighting or ambiance. We used the keyshots as references in order to maintain coherence during the whole sequences. They also allowed us to have a global idea of what the film was going to look like. After that, we just picked our favorite shots to work on, while trying to stay efficient.

“ When will the film be online for our dear readers ? ”

Melanie : The movie should be online around next June, but it depends on how it goes regarding festivals… we’re used to Supinfocom shorts being put online about two years after their creation ! So you might have to wait…

“ Do you have some tips for the future lighting students who are currently working on their own graduation short ? ”

Melanie : Lots and lots of references. It’s so important, even with non-realistic projects! If you ever see something that looks like a scene in your movie, take pictures for future reference. We can’t have everything in mind and reality is a guide as well as an inspiration to enrich the image you are working on with details that not a lot of people will see but that will make them believe and feel it. One last thing… Less is better! Two lights are generally enough to create a good lighting and let you have more control over the whole image.

Beatrice : The artistic director of the team has to trust his point of view and the intentions he wants to see on-screen. He has to pick what he needs and doesn’t need from the teacher’s advice. Some decisions will make them unhappy, but that’s because they care and no offense should be taken on both sides. And precisely for the lighting, use references, it will give you richer images. Also, think of the whole image first. Only then you can add the little rim light only if it doesn’t alter the global coherence. Melanie : We’re actually taking a summer break after 5 years of studies, we haven’t found work yet. Personally I would like to work in London in compositing or anything related to the development/pre-production of projects. I love this city’s and its people’s energy, it really makes me want to work with them ! I don’t really have a type of studio, it just depends on the whole mood/ambiance of it!

Beatrice : I’m still looking. I want to be a houdini artist in a motion design/advertising studio. I want to try weird 3D stuff and see how far you can go using CGI.

“ A last word ? We are glad to have you on board, again bravo for The Stained Club, long life to it in worldwide festivals, and welcome in The Lighting Club!”

Melanie : Thanks again ! I hope it can inspire students to work hard on their graduation movie and to always be honest with themselves in their work.

Even if I had the opportunity to watch it in premiere, as you know the short is sadly not online for now. BUT they released an awesome trailer that will allow you to see their wonderful work !

A few references seems to be a bit obvious in my mind when I watched the short, such as Que Dalle short from the Gobelins, Where the Wild Things Are directed by Spike Jonz or My Life as a Courgette directed by Claude Barras. The soundtracks are impressive and let me though about the Swiss Army Man (directed by Daniel Kwan, Daniel Scheinert) original soundtracks a bit (Hello Valentin, the composer, who I worked a bit with, a few years ago, impressive work here again ! )

Concerning the artistic direction we could think about Adventure Time in terms of shapes (and the main character is called Finn, such a coincidence..). They decided to create simple shape and original design for a simple but original story. A lot of challenges for this short such as a long list of different mood/lighting, fx design, “realistic cartoon shading’’,  lipsync, animation, a few environment indoor or outdoor etc… Awesome !

I hope you will have the chance to watch it as soon as possible in festival, or at least, in a year, on the internet.

See you soon for the Lighting Club #02 😉

View all posts by Amoow